Wake up .. before it is too late

This article targets everyone who wishes to see the coming danger and not bury his head in sand !!

On the first of August, according to the Jewish calendar every year, some religious Jews go to southern Jordan, specifically to Petra, not for the purpose of tourism and recreation, but for a journey on foot to what is considered in their belief a religious pilgrimage, and to visit the tomb of (Aharon Kahan), which is located on one of its peaks Overlooking the ancient city at a height of 1353 meters above sea level. 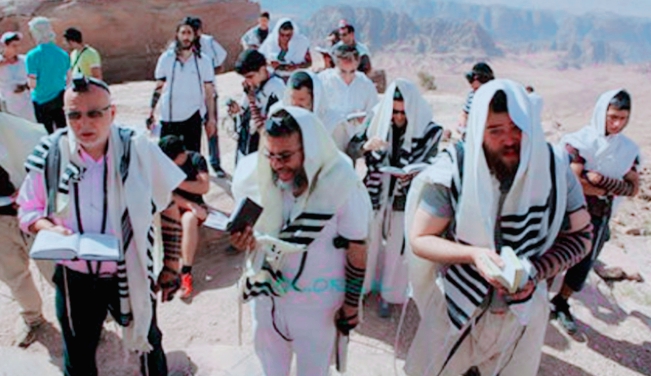 The shrine of the Prophet Harun is a small mosque built by the Mamluks. The Jews - allegedly from their religious beliefs - pray in it and recite biblical hymns, and on the top of the mountain they look beyond the south of Jordan to go beyond the Saudi depth and reach the ruins of the Jews of Bani Qaynuqa, Banu Qurayza and Bani al-Nadir in Yathrib (Medina), who still dream of their right to own the antiquities of their ancestors.

From the point of view of the Jews, according to the narration of the Bible that those who established Petra were the descendants of the Prophet "Naboth", the eldest son of the Prophet Ismail, and that it was built in the kingdom of Edom, more than three thousand years ago, by (Esau), Jacob's twin brother, whose name became (Israel) They also believe that the ancient name of Petra (Sala) is a Hebrew word meaning (rock), and they believe that God addressed our master Moses in its mountains, and somewhere in it there is the most important and most valuable secret in their history, which is (the Ark of the Covenant) that contains the Ten Commandments that God gave it to our master Moses, and some of what Moses left, in addition to the stick of his brother Aaron, whose body lies on top of one of its mountains.

Also in Petra are the sacred water springs (the eyes of Moses) that exploded after the Prophet of God Moses struck the rock in order to water the twelve tribes of Jews who wandered in the desert for forty years.

Their holy book did not explicitly mention the name of Petra of Jordan, but the rabbis of the Jews rely on historical events and circumstantial evidence in religious prophecies and texts indicating that the land of Jordan alone will be the site of the last suffering before the Resurrection of the Hour at the end of time, when the Jews will flee the land of Judaism (Jerusalem) They are walking through the mountain range west of the Dead Sea towards the south, where the fortified city (Petra) is like the city of refuge in which they will take shelter before the Antichrist comes with his demonic armies from all sides except the east, where Jordan.

In order to prove the right of the Jews to the historical and archaeological areas of Jordan, especially the southern regions, these places are subjected to an organized campaign of Judaizing from the Jewish tourists who visit them by tampering with them and destroying them with erasure and distortion, and forging them by adding new writings, burying fake Jewish artifacts in them, stealing what existed from them, and the process of buying lands organized in names Foreign partners.

Today, the Petra Region law is being brought up to the House of Representatives as a matter of urgency and in an exceptional cycle, with the filming of a controversial American movie claiming the right of Jews in Petra This caused the anger of the Jordanians and their refusal to include in the Petra Region Authority’s new bill allowing foreigners to own land in it. Because of the danger of this in opening the way for Jews to infiltrate the most important heritage treasure in the Jordanian lands.

We are all aware that Jordan has never been far from the Jewish settlement plans, because they believe that its lands were at an ancient historical stage under their control, and they claim in their forged history that they possessed eastern Jordan before they owned Palestine.

The Jordanians fear that after the Zionist enemy robbed Palestine and its Canaanite history, it has become a fait accompli to expand its settlement expansion project towards the east and south of Jordan, including Petra, and steal the history of the Nabatean Arabs on the basis of his claim that Petra historically is nothing but a Jewish heritage! D.