Positive and negative affirmations and their effect on the subconscious mind

In job interviews and interviews with celebrities, many are asked: “Where do you see yourself in five years?” And in many representative and life dialogues we hear the phrase: “What happened that you were afraid of,” and many times we read the phrases: “Everything is expected to come,” and “optimism.” What Yakan desires” attributed to famous sages and philosophers, do ideas have all this ability to control our lives and the course of events in it? Can a person’s view of something contribute to its occurrence or negate the possibilities of its occurrence?

This is what we will explain today in our article on positive and negative affirmations and their effect on the subconscious mind. We will first define the concept of affirmations, and explain their positive and negative types, then we will talk about the mechanism of their impact on the subconscious mind and how to touch their results in our real life.

The concept of affirmations:

Before entering our topic “Positive and Negative Affirmations and Their Effect on the Subconscious Mind,” we must first explain the concept of affirmations; So we answer the question you have in mind, "What are affirmations?" With the following definition:

Affirmations are repeated phrases or sentences that affect the way a person looks at things and deals with them, and then influences his responses, reactions and his view of them. Affirmations, in their general sense, may not be just statements; Rather, they may be readable images or phrases, and we will illustrate this with realistic examples:

Suddenly my friend had an obsession with wearing watches. She did not know its source and did not realize the reason for it. She even bought an expensive watch from a famous brand. Each scene, the watch was associated with the elegant attractive appearance of the actress and her beloved, sober personality in society. 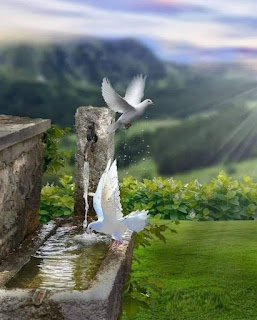 Out of my friend’s hidden feeling of wanting to appear in this appearance, her interest in wristwatches emerged, and then the forearm of the hand played the role of emphasizing the link between elegance and sobriety in wearing a wrist watch.

Have you noticed in the recent period the spread  of plastic surgery among women and even men? Did you wonder why? The affirmations here contributed greatly to the spread of this phenomenon. Unfortunately, they were not positive affirmations.

Rather, negative affirmations and we will explain it. In this era of time, people care a lot about cinema, television and social networking sites, which are now swept by a stereotype of beauty that is trying to generalize itself to everyone; Most of the bloggers, actresses, and influencers have become sharing formal traits.

Wide colored eyes, a small raised nose, full lips, a graceful figure, clear and wrinkled skin, and other features that are naturally present in few people.

But because of the plastic surgeries that this category performs, a stereotype of beauty has been formed among people; This is what prompted natural humans to imitate these models that dominated people's minds, and blew up in their minds every trace of beauty in diversity and difference and any form other than these standards.

The plump girl did not like her appearance and exhausted herself with diets because  obesity was not a standard of beauty, as well as the girl with a natural nose who lost her self-confidence as a result of the visual affirmations that she sees every day, which results in an impact on societal belief, and then the plump person hears the phrase: Lose your weight to be more beautiful.” And the brunette hears: “Apply skin-lightening cream to become more beautiful.” The impact of these attitudes and phrases on the human being is great and great, even if he did not notice it, and the repetition of hearing these comments from the ocean is like a drop of water in the rock, digging its course slowly and repeatedly and cumulatively; This causes people to lose their self-confidence and fall into a cycle of low self-esteem. The importance of affirmations lies in implanting new beliefs in people or changing wrong beliefs ingrained in their minds.

What are positive affirmations?

Positive affirmations are a set of positive phrases and sentences that reinforce the value of a positive thing in a person, which he repeats to himself, writes or imagines in order to enhance his self-esteem, emphasize his value, or replace it with a false or negative belief instilled in him before.

Conditions for positive affirmations are:

In the present tense, not in the past or future tense, such as: "I love money and I earn it easily."

Brief and specific: "I'm getting close to my goal of getting a black Mercedes."

It does not contain the negation: "I want to succeed" and not: "I do not want to fail."

It is supported by the fantasies and visualizations that reinforce it, such as “that a person imagines himself closing the door of a black Mercedes, turning the key and playing the music” as if he were doing a habitual action.

Repeated continuously for a period of no less than 21 days until the subconscious mind gets used to its presence.

Positive affirmations are able to replace preexisting negative affirmations by repeating them with persistence and belief in their occurrence, and the phrases: “I am brown and beautiful” can often replace: “I wish I were white and beautiful”, and the sentence: “I deserve love ” in place of the sentence: “I will not My husband loves me after giving birth and my body has changed.”

They are beliefs that, as soon as they were replaced, the bearer's view of himself changed radically, and this was clearly reflected in his actions and words.

What are negative affirmations?

The three-year-old urged his mother to help her take the plates of food to the table, and she responded to his insistence and gave him the glass salt bowl. You can't do anything."

The child forgets the situation and rushes to help in another situation and about any new failure “You could not do this, you are not good for anything.” These negative affirmations are repeated many times in the hearing of the young child, and they are rooted in his subconscious mind, and he grows up in a shaky self-confidence, and whenever he fails in something no matter what As a child, he repeated the same negative affirmations to himself, "I'm not good for anything," and gave up.

How Affirmations Affect the Subconscious Mind?

This analogy explains a lot about the relationship between affirmations and the response of the subconscious mind to them, and we will illustrate this with an example; When someone tries to inculcate a new belief in their mind, such as, “I love my body, I keep it healthy, I feed it healthy,” these sentences are positive affirmations that the conscious part of the mind is eager to repeat.

By repeating this phrase daily or every moment a person sits at the dining table, he will instill in the subconscious mind the importance of focusing on healthy foods out of love for the body; This prompts him at first to control the quantities of unhealthy food he eats, and then to avoid them, and then he gets used to eating healthy foods always.

The effect of positive or negative affirmations in the subconscious mind is on the axis of "idea, feeling, and behavior", which has a great impact on the human being.

This new and feeling anxious about these strange thoughts, but with persistence and perseverance he will get used to them and accept them, and then they will affect his behavior and actions later, and we will illustrate this with an example:

In one of the classrooms, the teacher posed a question and asked the students for their opinion on how to solve it. The distinguished students in the class rushed to present their opinions, but the teacher did not hear the answer he was waiting for, so he asked the students one by one to see what was in each of them until the turn came to a handsome Who answered briefly out  of shame from his colleagues and lack of confidence in repaying his opinion, especially after the failure of his superior comrades, so he muttered a few different words that caught the teacher’s attention, and when he asked him to elaborate on his opinion, he was very impressed and said: “You are very good at analyzing issues, Wasim.” Situations similar to this position followed several times, and the shy student heard the praise phrase: “You are very good at analyzing problems” from his teacher in each lesson. The student’s confidence increased in himself and he adopted this belief in his next life, and he became adept at analyzing mathematical and life issues.

In this example, the teacher’s words played the role of positive affirmations that instilled the idea of ​​ingenuity in analysis in the mind of a person, and turned into a feeling of confidence and self-esteem that was reinforced by attitudes, and translated into the form of behavior that this individual took in his life, so he chose the profession of data analysis as his work based on a belief rooted in He is very good at analyzing data.

This example clearly explains how affirmations affect the subconscious, the only difference being that a person is a teacher himselfn.

Positive and negative affirmations are the group of sentences and phrases that program the subconscious mind, and determine the way in which it accepts facts and events, and responds with it to the situations and changes that occur; It is the device that controls our feelings, thoughts, and behaviors; Therefore, we must be fully aware of how we address ourselves and how we address others.