Study: This is how dinosaurs reigned in the ancient world!

Previous studies revealed that dinosaurs were multiplying and increasing their numbers in warm climates and tropical forests, but a recent study confirmed something different, which may indicate the beginning of writing a new history for the mysterious dinosaur era.

Dinosaurs are often thought of as creatures that thrived in warm climates and in lush tropical forests. But a new study disproves this notion and reveals that dinosaurs withstood freezing temperatures, which eventually allowed them to dominate the planet for millions of years.

The study's lead author, paleontologist Paul Olsen, made exploratory studies in the Jonggar Basin in China in 2016, an area rich in dinosaur fossils and footprints. On the first day, on their first stop, Olsen's team found something coarser than sand and gravel. It seemed unusual to Olsen. 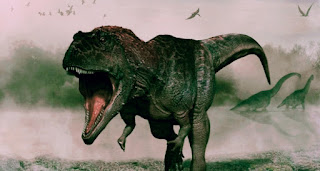 Olsen, who led the research published in the journalScience Advances , for Mashable: "We didn't move for three hours.. we kept arguing about what the thing was."

The research team gradually got rid of the strange sediments until it reached a sediment layer containing pebbles that was formed about 206 million years ago. According to geological studies, the accumulation of ice in the waters adjacent to this layer of land eventually led, through the ages, to the transfer of rocks from the ice layer to the bottom of the lake.

The presence of these specific rocks in that area indicates the presence of floating ice in an area where dinosaurs roamed, leaving clear traces. The researchers also determined that the Jonggar Basin is located above the Arctic Circle, which means that it was once a very cold region, especially in winter.

"The whole picture of dinosaurs is reversed," Olsen emphasized. "They are basically cold-adapted animals." Scientists who have seen the study say it may be an indication that a new history is being written for the era of the dinosaurs.

Dinosaurs first appeared in the Triassic period about 230 million years ago when the Earth's continents were one giant mass called "Pangea". At the end of the Triassic period, massive volcanic eruptions caused the planet to warm up.

At this time, carbon dioxide levels rose and the oceans became extremely acidic. It proved that these conditions were not conducive to the life of most species of creatures; The fossil record shows that three out of four species that lived on land and in the oceans have become extinct. However, the dinosaurs somehow survived, and then ruled the Jurassic period. But the mystery remains: How exactly did you succeed in doing this?

The study adds that rising levels of sulfur dioxide have caused the planet to darken and cause long periods of sharp drop in temperatures to freezing point in what is known as a "volcanic winter".

Crucially, the decrease in temperatures during intense volcanic winters was much greater than the warming from carbon dioxide emissions.

According to studies, many wild animals - especially those that lived in the tropics - could not adapt to the harsh cold and became extinct, including crocodile-like species closely related to dinosaurs. But Olsen said the dinosaurs survived through a unique process of adaptation.

Similar to the feathers of birds that protect them from the cold, dinosaurs also had a feather-like structure called "primitive feathers" that they inherited from their ancestors. However, large dinosaurs did not need this strategy for thermal insulation, because they were simply too gigantic and had high metabolic rates that protected them from the extreme cold, says Olsen.

With competing animals largely eliminated, dinosaurs eventually managed to rule the planet for nearly 200 million years, both herbivorous and carnivorous , according to Nation World News.

During this period, cold-adapted plants flourished, allowing an increase in the number of herbivorous dinosaurs . "The rich vegetation allowed the herbivores to survive the winter, which of course was food for the carnivores," Olsen explained.

This discovery could rewrite our understanding of the dominance of dinosaurs in the Jurassic period. "I think the study was exciting because it tells another story from another time, and it challenges the stereotype of dinosaurs," said Anthony Fiorello, a paleontologist at Southern Methodist University who read the study. "Their isolation mechanism (the dinosaurs) was particularly very interesting," added Fiorillo, who researches dinosaurs in the Arctic.

Fiorello explained that the growth of dinosaurs may have slowed during the colder months in the Arctic compared to the warmer months, and it is very likely that the dinosaurs had already adapted to the freezing climate.

Olsen and his team plan to continue searching for hard evidence of dinosaur population growth in cold climates.